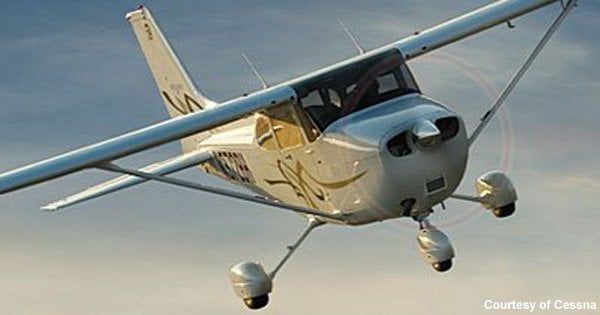 Find All Cessna 172 Aircraft For Sale

The Cessna 172 Skyhawk is a single engine, piston aircraft with fixed gear. The C172 is a high wing airplane made by the Cessna Aircraft Company between the years 1956 until 1986. It was taken out of production until 1997 where is still made today. The Cessna Skyhawk is the ultimate training aircraft and the most popular single-engine aircraft ever built. First flown in 1955, more 172s have been built than any other aircraft. It seats up to 3 passengers and 1 pilot.

Measured by its longevity and popularity, the Cessna 172 is the most successful aircraft in history. Cessna delivered the first production model in 1956 and as of 2015, the company and its partners had built more than 44,000. The aircraft remains in production today.

The Skyhawk's main competitors have been the Beechcraft Musketeer and Grumman AA-5 series (neither currently in production), the Piper Cherokee, and, more recently, the Diamond DA40 and Cirrus SR20.

The Cessna 172 started life as a tricycle landing gear variant of the taildragger Cessna 170, with a basic level of standard equipment. In January 1955, Cessna flew an improved variant of the Cessna 170, a Continental O-300-A-powered Cessna 170C with larger elevators and a more angular tailfin. Although the variant was tested and certified, Cessna decided to modify it with a tricycle landing gear, and the modified Cessna 170C flew again on June 12, 1955. To reduce the time and cost of certification, the type was added to the Cessna 170 type certificate as the Model 172. Later, the 172 was given its own type certificate, 3A12. The 172 became an overnight sales success, and over 1,400 were built in 1956, its first full year of production.

Early 172s were similar in appearance to the 170s, with the same straight aft fuselage and tall landing gear legs, although the 172 had a straight tailfin while the 170 had a rounded fin and rudder. In 1960, the 172A incorporated revised landing gear and the swept-back tailfin, which is still in use today.

The final aesthetic development, found in the 1963 172D and all later 172 models, was a lowered rear deck allowing an aft window. Cessna advertised this added rear visibility as “Omni-Vision.”

The Cessna 172 may be modified via a wide array of supplemental type certificates (STCs), including increased engine power and higher gross weights. Available STC engine modifications increase power from 180 to 210 hp (134 to 157 kW), add constant-speed propellers, or allow the use of automobile gasoline. Other modifications include additional fuel tank capacity in the wing tips, added baggage compartment tanks, added wheel pants to reduce drag, or enhanced landing and takeoff performance and safety with a STOL kit. The 172 has also been equipped with the 180 hp (134 kW) fuel injected Superior Air Parts Vantage engine. 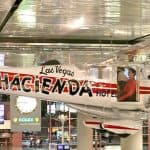 On December 4, 1958, Robert Timm and John Cook took off from McCarran Airfield in Las Vegas, NV in a newly built Cessna 172, registration number N9172B. Sixty-four days, 22 hours, 19 minutes and 5 seconds later, they landed back at McCarran Airfield on February 4, 1959. Food and water were transferred by matching speeds with a chase car on a straight stretch of road in the desert, and hoisting the supplies aboard with a rope and bucket. Fuel was taken on by hoisting a hose from a fuel truck up to the aircraft, filling an auxiliary belly tank installed for the flight, pumping that fuel into the aircraft's regular tanks and then filling the belly tank again. The drivers steered while a second person matched speeds with the aircraft with his foot on the vehicle's accelerator pedal. 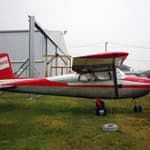 Early Cessna 172s had a “fastback” rear cabin with no rear window.

The 172B was introduced in late 1960 as the 1961 model and featured a shorter landing gear, engine mounts lengthened three inches (76 mm), a reshaped cowling, and a pointed propeller spinner. For the first time, the “Skyhawk” name was applied to an available deluxe option package. This added optional equipment included full exterior paint to replace the standard partial paint stripes and standard avionics. The gross weight was increased to 2,250 lb (1,021 kg).

The 1962 model was the 172C. It brought to the line an optional autopilot and a key starter to replace the previous pull-starter. The seats were redesigned to be six-way adjustable. A child seat was made optional to allow two children to be carried in the baggage area. The 1962 price was US$9,895. A total of 889 172C models were produced.

The 1963 172D model introduced the lower rear fuselage with a wraparound Omni-Vision rear window and a one-piece windshield. Gross weight was increased to 2,300 lb (1,043 kg), where it would stay until the 172P. New rudder and brake pedals were also added. 1,146 172Ds were built.

1963 also saw the introduction of the 172D Powermatic. This was equipped with a Continental GO-300E producing 175 horsepower (130 kW) and a cruise speed 11 mph (18 km/h) faster than the standard 172D. In reality this was not a new model, but a Cessna 175 Skylark that had been renamed for its last year of production. The Skylark had gained a reputation for poor engine reliability, and the renaming of it as a 172 was a marketing attempt to regain sales through rebranding. The move was not a success, and neither the 1963 Powermatic nor the Skylark were produced again after the 1963 model year.

The 172E was the 1964 model. The electrical fuses were replaced with circuit breakers. The 172E also featured a redesigned instrument panel. 1,401 172Es were built that year as production continued to increase.

The 1965 model 172F introduced electrically operated flaps to replace the previous lever-operated system. It was built in France by Reims Cessna as the F172 until 1971. These models formed the basis for the U.S. Air Force's T-41A Mescalero primary trainer, which was used during the 1960s and early 1970s as initial flight screening aircraft in USAF Undergraduate Pilot Training (UPT). Following their removal from the UPT program, some extant USAF T-41s were assigned to the U.S. Air Force Academy for the cadet pilot indoctrination program, while others were distributed to Air Force aero clubs.

The 1967 model 172H was the last Continental O-300 powered model. It also introduced a shorter-stroke nose gear oleo to reduce drag and improve the appearance of the aircraft in flight. A new cowling was used, introducing shock-mounts that transmitted lower noise levels to the cockpit and reduced cowl cracking. The electric stall warning horn was replaced by a pneumatic one.

The 1968 model marked the beginning of the Lycoming-powered 172s.

The 172I also introduced the first standard “T” instrument arrangement. The 172I saw an increase in production over the “H” model, with 1,206 built.

The Cessna Company planned to drop the previous 172 configuration for the 1968 model year and replace it with a cantilever-wing/stabilator configuration that would be the 172J. However, as time for model introduction neared, those dealers who were aware of the change began applying pressure on the factory to continue the previous configuration. They felt the new model would be less usable as a trainer. Consequently, and at the last minute, the decision was made to continue the 172 in its original configuration. The planned 172J configuration would be introduced as a new model, the 177. The deluxe option would become the 177 Cardinal. The “J” designation was never publicly used.

The 1970 model was still called the 172K, but sported fiberglass, downward-shaped, conical wing tips. Fully articulated seats were offered as well. Production in 1970 was 759 units.

The 172L, sold during 1971 and 1972, replaced the main landing gear legs (which were originally flat spring steel) with tapered, tubular steel gear legs. The new gear had a width that was increased by 12 in (30 cm). The new tubular gear was lighter, but required aerodynamic fairings to maintain the same speed and climb performance as experienced with the flat steel design. The “L” also had a plastic fairing between the dorsal fin and vertical fin to introduce a greater family resemblance to the 182's vertical fin.

The 172M of 1973–76 gained a drooped wing leading edge for improved low-speed handling. This was marketed as the “camber-lift” wing.

The 1974 172M was also the first to introduce the optional ‘II' package which offered higher standard equipment, including a second nav/comm radio, an ADF and transponder. The baggage compartment was increased in size, and nose-mounted dual landing lights were available as an option.

In 1976, Cessna stopped marketing the aircraft as the 172 and began exclusively using the “Skyhawk” designation. This model year also saw a redesigned instrument panel to hold more avionics. Among other changes, the fuel and other small gauges were relocated to the left side for improved pilot readability compared with the earlier 172 panel designs. Total production of “M” models was 7306 over the four years it was manufactured.

The 1978 model brought a 28-volt electrical system to replace the previous 14-volt system. Air conditioning was an option.

The “N” remained in production until 1980 when the 172P or Skyhawk P was introduced.

In 1982, the “P” saw the landing lights moved from the nose to the wing to increase bulb life. The 1983 model added some minor soundproofing improvements and thicker windows.

A second door latch pin was introduced in 1984.

Production of the “P” ended in 1986, and no more 172s were built for eleven years as legal liability rulings in the US had pushed Cessna's insurance costs too high, resulting in dramatically increasing prices for new aircraft.

The 172S is built primarily for the private owner-operator and is, in its later years, offered with the Garmin G1000 avionics package and leather seats as standard equipment. As of 2009, only the S model is in production.

The Cessna Skyhawk is the ultimate training aircraft and the most popular single-engine aircraft ever built. With forgiving flight characteristics, great visibility, a sophisticated glass cockpit outfitted with G1000 avionics, slow landing speed and a forgiving stall – the Cessna Skyhawk is a flight training favorite ideally suited for student pilots.

The FR172 Reims Rocket was produced by Reims Aviation in France from the late 1960s to the mid-1970s. It was powered by a Rolls-Royce built, fuel-injected, Continental IO-360-H(B) 210 hp (160 kW) engine with a constant-speed propeller. Variants included the FR172E until FR172J.

In reviewing this new model Paul Bertorelli of AVweb said: “I’m sure Cessna will find some sales for the Skyhawk JT-A, but at $420,000, it’s hard to see how it will ignite much market expansion just because it’s a Cessna. It gives away $170,000 to the near-new Redbird Redhawk conversion which is a lot of change to pay merely for the smell of a new airplane. Diesel engines cost more than twice as much to manufacture as gasoline engines do and although their fuel efficiency gains back some of that investment, if the complete aircraft package is too pricey, the debt service will eat up any savings, making a new aircraft not just unattractive, but unaffordable. I haven’t run the numbers on the JT-A yet, but I can tell from previous analysis that there are definite limits.”

The model was certified by both EASA and the FAA in June 2017. It was discontinued in May 2018, due to poor sales as a result of the aircraft's high price, which was twice the price of the same aircraft as a diesel conversion. The aircraft remains available as an STC conversion from Continental Motors, Inc.