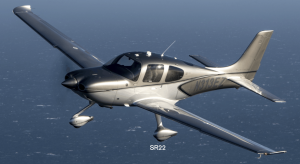 View All Cirrus Aircraft For Sale

The Cirrus Design Corporation, doing business as Cirrus Aircraft (and previously branded as Cirrus Design), is an aircraft manufacturer that was founded in 1984 by Alan and Dale Klapmeier to produce the VK-30 kit aircraft. The company is owned by a subsidiary of the Chinese government-owned AVIC, and is headquartered in Duluth, Minnesota, United States, with additional operational locations in Grand Forks, North Dakota, Knoxville, Tennessee, and McKinney, Texas. Cirrus markets several versions of its three certificated single-engine light aircraft models: the SR20 (certified in 1998), SR22 (certified in 2000), and SR22T (certified in 2010). As of April 2018, the company had delivered over 7,000 SR-aircraft in nearly 19 years of production, and has been the world's largest producer of piston-powered aircraft since 2013.

Sales of the SR-series grew rapidly during the 2000s, until the economic crisis of 2008. Cirrus was planning to market a light-sport aircraft called the SR Sport, but suspended the project in 2009, due to financial challenges and a lack of market demand. This has since been cancelled. After a return to company growth in the 2010s, Cirrus certified and began deliveries of the Vision SF50 very light jet in 2016. Upon its delivery, the aircraft became the first civilian single-engined jet to enter the market, and is often referred to as a “personal jet”.

The company produces all of its aircraft with composite materials and is known for pioneering new technologies in light general aviation aircraft manufacturing, including glass cockpits and full-airframe ballistic parachutes.

In 2001, Cirrus sold a majority of the company to Bahrain-based Arcapita Group. Ten years later, the manufacturer was acquired by China Aviation Industry General Aircraft (CAIGA), which is a division of the Aviation Industry Corporation of China (AVIC).

Cirrus Aircraft has several operational facilities throughout the United States.

On 27 December 2007 the company secured a lease for the former Northwest Airlines hangar at Duluth International Airport. The 189,000-square-foot building was to be used for construction of its new Cirrus Jet. Cirrus canceled the lease in 2009 during the height of the Great Recession.

In February 2015, the City of Duluth had agreed to put up US$6M and had asked the state contribute the remaining US$4M to build a US$10M factory on the Duluth Airport dedicated to the production of SF50 Vision jets. The city would then try to recoup its costs for the facility from lease payments by Cirrus over time. The space opened on 19 December 2016.

On 6 May 2015 Cirrus announced that it will establish a new facility campus called the “Vision Center” in Knoxville, Tennessee on the city's McGhee Tyson Airport. The facility will focus on all customer interactions including training, maintenance & repair, personalization, and deliveries for the Vision Jet and SR-series. The center opened on 12 January 2017. All manufacturing operations were said to remain in Duluth and Grand Forks.

In May 2019, the company announced that it will open its first factory-direct satellite service facility outside of Knoxville, at McKinney National Airport near Dallas, Texas, where it will expand its flight training, maintenance, and aircraft management operations.

In February 2020, Cirrus announced plans to establish a new engineering and design center in Phoenix, Arizona.

The Cirrus SR (Single Reciprocating) Series aircraft (including the SRV, SR20, SR22 and SR22T) are designed around composite technologies with “Cirrus Perspective” by Garmin (and previously Avidyne Entegra) digital flight displays and modern avionics as standard equipment. The aircraft are all electric – no vacuum systems are used. Redundancy is provided by dual batteries and alternators. The series originally began as a four-seat aircraft, with a smaller fifth seat added in 2013. The SR22 is also available with TKS anti-icing equipment, which enables flight into known icing conditions. The SR aircraft series was the first of its kind to come equipped with flight envelope protection in the form of an electronic “level” button, as well as “airbag seatbelts”, two airbags installed in the shoulder harnesses of both the pilot and co-pilots' seat belts.

The series incorporates other unusual design elements. All SR-aircraft use a mechanical side yoke instead of the traditional yoke or stick flight controls. The aircraft also use a single power lever that adjusts both throttle and propeller RPM via a mechanical cam actuated throttle and propeller control system. Construction is dominated by composite materials (a technique the company has used with every model since its first design in 1988, the VK-30), although traditional aluminum is used for flight control surfaces.

The SR22T is powered by a Continental TSIO-550-K turbocharged engine. Turbocharging allows the engine to maintain maximum power at higher altitudes while increasing the maximum operating altitude to 25,000 ft.

SR-series aircraft are equipped with the Cirrus Airframe Parachute System (CAPS), developed in association with Ballistic Recovery Systems, a ballistic parachute deployed from the back of the aircraft. In many inflight emergencies, it allows the entire airplane to descend safely to the ground and has been credited with saving over 150 lives to date. Cirrus was the first manufacturer to receive FAA certification for production aircraft with ballistic parachute systems, and remains the only aviation company to implement the device as a standard equipment on all its models. The system was first tested in 1998 by late Air National Guard F-16 pilot and chief Cirrus test pilot, Scott D. Anderson, who completed the tests in an SR20 over the southern California desert.

The turbofan-powered Vision SF50 also comes equipped with CAPS, making it the first jet with a whole-plane parachute to receive certification.