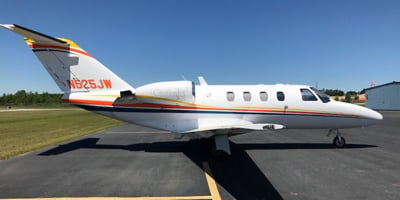 The Cessna CitationJet Model 525 series was a light twin-turbofan business jet produced by Cessna from 1993 until 2000, serial numbers 0001 to 0359.  Developed as replacement of the Citation I with shorter fuselage, super critical wings and T-tail. Combines jet speed with very good field performance. Was replaced by CJ1 in 2000 (FAA certification in February and first delivery in March). Model 525 seats up to 6 passengers and 2 pilots.

The Cessna CitationJet/M2/CJ series (Model 525) are light business jets built by Cessna and part of the Citation family. Launched in October 1989, its first flight was on April 29, 1991, FAA certification was awarded on October 16, 1992, first delivery happened on March 30, 1993, and by June 2017, 2,000 of all variants have been delivered. Powered by two 1,900 lbf Williams FJ44s, it uses the Citation II's forward fuselage with a new carry-through section, straight wing, and T-tail. The basic model was updated with the CJ/CJ1/M2 names, it was stretched in the CJ2/CJ2+ delivered since 2000, then further in the CJ3/CJ3+ delivered from December 2004 and finally in the CJ4 delivered since 2010.

Cessna launched the $2.4 million model 525 CitationJet at the October 1989 NBAA convention in Atlanta, estimating a demand for 1,000 aircraft over ten years. Succeeding the 700 original Citation Is produced since 1972, first flight was scheduled for spring 1991, FAA certification in October 1992 and deliveries by the end of the year.

The six-seat CitationJet is a cantilever monoplane with retractable tricycle landing gear and a pressurized cabin.

The jet uses the Citation II's forward fuselage, a new carry-through section, a new laminar flow, supercritical wing developed with NASA and Boeing, and a T-tail. Powered by two 1,900 lbf Williams FJ44s, the 10,000 lb aircraft has a trailing link undercarriage for smooth landings and can be flown by a single pilot. Cabin length is reduced by 1 ft 6 in, range is 1,500 nmi with four passengers and it can cruise at 437 mph.

Its FJ44 has a 16:1 overall pressure ratio, its wing area is 240 sq ft and it can cruise at Mach 0.7. It features EFIS avionics, its fuselage is 11 inches (27 cm) shorter than the Citation I's, but has a lowered center aisle for increased cabin height.

The CitationJet retains the 58 in inside diameter, circular cross-section fuselage of the original 1971 Citation 500, a semi-monocoque construction of conventional aluminum alloys assembled with rivets, fasteners and adhesive bonding. Composite materials save weight in non-load-bearing components including fairings and the nose radome. The NASA high-speed 0213 airfoil sustains natural laminar flow over 30% of the upper surface for 10-15% better lift-to-drag than the larger NACA 23000-series wing of the Citation 500. Its structure is a conventional ladder with chord-wise ribs over front and rear spars, and an aft sub spar to support the landing gear. To reduce interference drag, a large fairing encases the low wing center section, and the engines are mounted high on the tail. The Williams FJ44 has a 2.58:1 bypass ratio.

The Cessna Model 525 CitationJet is a six-seat light semi-monocoque business jet with a cantilever wing and pressurized cabin. The aircraft’s structure improves on tried and tested elements from earlier Cessna Citation iterations.

The forward fuselage of the Cessna CitationJet is based on the Citation II’s, with the internal diameter of the passenger cabin being kept at 58 inches, much like the original Citation I. Cabin length on the other hand was shortened by 1 ft 6 in, with the loss of horizontal space being compensated by the lowered central aisle to add headroom and a rather spacious feeling for what factually is a small jet.

Out back, the tail section was redesigned from previous Citations in order to have a larger baggage area combined with easy access to pre-flight items such as the battery compartment and fire extinguisher bottles. Internal baggage capacity is 100 lbs across 4 cu bf, whereas the external baggage compartment fits 725 lbs within 54 cu ft.

The original Cessna CitationJet is powered by a pair of Williams FJ44 engines, one of the most compact turbofan engines in the market to date. The engines lack thrust reversers, but Williams added diverting paddles mounted to the fuselage by the exhaust nozzle. These work on the same principle as the traditional solution, except they have a much smaller footprint as far as weight and space are concerned.

The supercritical wing was the result of a joint study conducted in partnership with Boeing and NASA, and it is combined with a T-tail arrangement. The airfoil profile on the Model 525 goes by NASA 0213 and brings on up to 15% better lift-to-drag ratio compared to the NACA 23000 used on the Model 500. The wing uses a ladder structure with chord-wise ribs over the front and rear spars, with an additional sub-spar supporting the landing gear.

A bleed air deicing system was installed in lieu of the deicing boots and fluids present on the Citation I and II, leading to lower weight without loss in efficiency.

To help retain the short field performance intended in the design requirements without requiring traditional thrust reversers, the CitationJet’s flaps system had a “ground flaps” position – after touchdown, the flaps are lowered to 60º to maximize drag and dump lift, while also automatically deploying the airbrakes.

Cessna’s focus on making the aircraft cheap to operate but with good performance shows on the details. To reduce interference drag, the wing and fuselage meeting point is covered by a large aerodynamic fairing, while the engines are mounted relatively high on the rear of the fuselage. Keeping up with industry trends, non-load-bearing sections such as the radome and wing root fairings are built using composite materials to reduce weight.

The cockpit of the initial Model 525 had its cockpit window size reduced compared to Citation I and II to reduce the temperature gradient between the flight deck and passenger cabin, mitigating the occurrence of drafts at higher altitudes. The instrument panel is fitted with Honeywell avionics, with a SPZ-5000 EFIS projected on two screens mounted on the left seat, an autopilot, Silver Crown radios, and a weather radar that outputs a color display.

Factory options for flight management were a KLN-900 GPS or a GNS-XSc FMS. The right seat is kitted out more modestly – standard six-pack instruments, coming in analog flavor, plus radio controls. The pilot also has a largely old-school dashboard out front, apart from the SPZ-5000 screens and the engine instruments on the panel centerline, outputting digital vertical tape readouts.

When loaded with four passengers plus crew, the Cessna Model 525 more than satisfactory performance, even if it was a far cry from the up-and-coming speedsters that broke into the scene in the same decade, such as Cessna’s much larger but also far faster Citation X. Within its size and class, the CitationJet delivered exactly what operators needed to get somewhere within reasonable times and without breaking the bank.

Performance for the Model 525 family varies somewhat significantly depending on the version of the aircraft. Climbs on a Cessna CitationJet and CJ1 to the standard cruise altitude of FL370 take 25 minutes. For comparison’s sake, its successor Cessna CJ2 brings this number down to mere 15 minutes thanks to the improved Williams FJ44-2C, with a thrust rating of 2400 lbf each compared to 1900 lbf for the FJ44-1A installed on the first two iterations.

Much like the majority of Cessna’s portfolio, the Model 525 is a docile flyer. The straight wing and responsive controls make it ‘feel’ like a Cessna, which is an immense help to pilots transitioning from other aircraft in their line.

Testament to this is the fact that, despite having a T-tail arrangement, the CitationJet lacks the stick pusher system normally associated with one for stall recovery. In fact, the Model 525 is so light that even in its early versions, it is perfectly capable of exiting a stall by simply applying more power.

Another example of this is the jet’s single-engine performance – flight testing demonstrated that it retains adequate rudder authority across the envelope in case of asymmetric thrust, which allowed Cessna to skip the installation of a rudder boost system. At maximum take-off weight, it can still sustain a climb rate of 568 fpm, which drops slightly to 540 fpm for the CJ1. The single-engine ceiling for the CitationJet and CJ1 is 23000 ft and 21200 ft, respectively.

An average flight on the Model 525 can be illustrated by the numbers. The take-off length for the CitationJet in standard atmosphere conditions is of 3080 ft, rising to 5000 ft at 25ºC. In zero-wind conditions, the aircraft can then fly out to 1100 nautical miles at 377 KTAS, including NBAA IFR reserves, with a required field length of 2465 ft to land.

The average fuel burn for the CitationJet is around 135 gallons per hour. The CJ1 boasts similar performance, with a slight penalty in runway requirements due to its higher gross weight. The CitationJet and CJ1 barely fall short of coast-to-coast trips in the United States in more concrete terms.

Somewhat unusual for a business jet, the Model 525 also spawned a primary jet trainer proposed to the United States Air Force and Navy in 1993. The prototypes, branded Model 526, had 75% parts commonality with the Model 525 and were fitted with zero-zero ejection seats arranged in a tandem configuration.

The tailplane had a conventional configuration instead of the T-tail, and the engines were mounted on the wing roots instead of the rear fuselage. The Cessna 526 did not go very far, but it showed how versatile the Model 525 design really is.