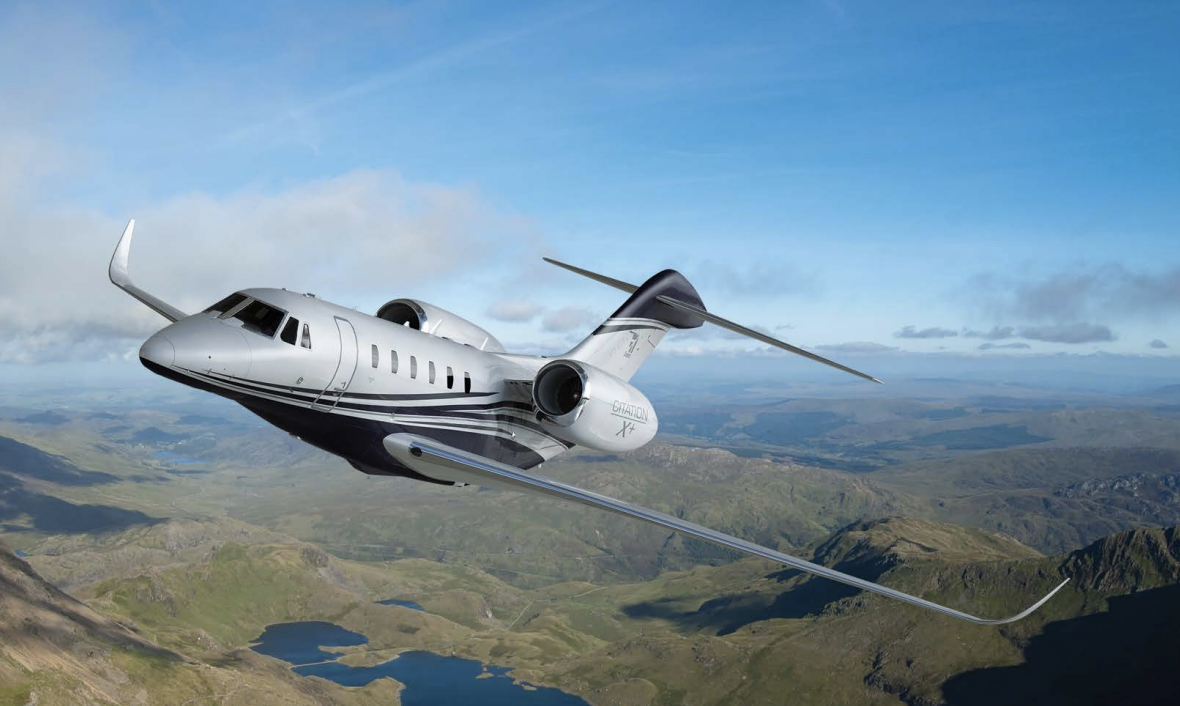 The Cessna Citation X model 750 series is a midsize business jet produced by Cessna from 2012 until 2018. The Citation X+ was designed with the Citation III fuselage with a stretched cabin, new swept wing and upgraded systems. It had a standard double-club interior which seats up to 8 passengers and 2 pilots.

In 2010, Cessna initiated a major update of the Citation X, initially dubbed the Citation Ten, which included upgraded AE3007C2 engines with new fans, Garmin G5000 flight displays with three 14-inch (36 cm) screens, and a heads-up display. The elliptical winglets that were available as an aftermarket option on the Citation X became standard, and a stretch of 15 in was incorporated to improve passenger comfort. Due to a 1.4% improvement in Specific Fuel Consumption (SFC) and increased thrust, the Citation X+ can support an increase in payload of 214 lb, an increase in cruise speed at FL490 from 460 to 479 knots, and a range increase of 190 nm. First flight was completed on January 17, 2012. The height has been increased to 19 ft 3 in, length increased to 73 ft 7 in, wing span has been expanded to 69 ft 2 in, maximum takeoff weight has increased to 36,600 lb, maximum cruise speed has increased to 527 knots (606 mph) at FL350, and maximum range has increased to 3,242 nautical miles (3,731 mi) (MTOW, Full Fuel, Optimal Climb and Descent, Mach 0.82 Cruise, FL450).

Despite Cessna's long history of building business jets and the number of aircraft in the Citation family, the Citation X was in many ways a completely new aircraft. The wing, tail, tail cone, gear, and systems are designed from scratch and not based on existing aircraft. The Citation X is also the first aircraft from Cessna to use a Rolls-Royce engine and fully integrated avionics. Although the Citation X may look similar to its predecessors, it is almost entirely composed of new parts. Part commonality is limited to some cockpit controls, the windshield, and the tail light bulb. The pressure bulkhead is also similar to previous designs. The Citation X has the same fuselage diameter as the Citations VI and VII; however, the wing attachment to the fuselage is different from the attachment in any previous Citation.

The aircraft incorporates a number of innovative design features. One attribute that is often first noticed is the large diameter of the engine intakes. This feature, related to the high bypass ratio turbofan, reduces the noise from the engines and improves fuel efficiency. Another obvious characteristic is the highly swept wing with a supercritical airfoil, used in order to increase the critical Mach number and therefore the top speed. The Citation X has 37 degrees of sweepback at the quarter chord, more than any other business jet and, among civil aircraft, second only to the Boeing 747's 37.5 degrees. The horizontal and vertical stabilizers are also highly swept and are arranged in a T-tail configuration.

In the Citation X+ the avionics were changed to the Garmin 5000 system.

In 2008, Winglet Technology, with the help of Cessna, began flight testing epoxy/graphite elliptical winglets on a Citation X. Flight testing was nearing completion in late 2008, with FAA supplemental type certification expected in 2009. The winglets increase range by 150 nm, lower fuel burn by 4–5%, improve hot and high performance as well as climb rate, permitting a climb to flight level 430 in 22 minutes, as opposed to 26 minutes without the modification. Climb to flight level 450 at maximum takeoff weight is possible without a step climb.[7] Cruise speed at altitude is expected to increase by 15 knots, and maximum takeoff weight will increase by 1200 lbs (545 kg). Excluding installation, the kit's projected cost is $395,000.

Elliptical winglets were made standard on Citation X+.