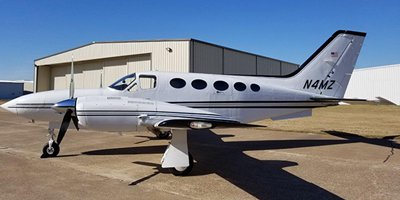 View All Cessna 421 Aircraft For Sale

The Cessna 414 is a low-wing, twin-engine, pressurized-turbocharged aircraft produced by Cessna from 1967 until 1985. Distinguishing features are: retractable landing gear and three-bladed, constant speed, fully feathering propellers. Model 421 seats up to 7 passengers and 1 pilot.

To get the performance the buyers were seeking, the 1967 and 1968 model year came with GTSIO-520-D 375 hp engines. That’s nearly three-quarters of a horsepower per cubic inch, and the inevitable stress meant short service life. Originally, the TBO was a mere 1200 hours. Later engines sported heavier crankcases that increased TBO to a still-low 1600 hours, which is where it remains. Durability isn’t the engines’ strong point.

The first 421's had a short nose and the maximum take-off weight was 6800 lbs. The standard fuel system gave a range of some 800 miles, while an optional 255-gallon system boosted the range to nearly 1200 miles. Owners say the higher fuel capacity is much prized and worth looking for.

The very next year, 1969, the design was refined, with a three-inch stretch of the fuselage, five more gallons of fuel capacity, and a 40-pound increase in gross weight for a total of 6840 lbs. The plane was redesignated the Cessna 421A and was still equipped with the GTSIO-520-D engines.

In 1971 the design was again improved. Both empty and gross weight increased with a maximum gross of 7450 lbs, the wingspan was increased by two feet, raising the service ceiling by 5,000 feet. The nose was stretched two feet to accommodate a baggage compartment capable of carrying a six-foot-long, 600-pound object, assuming the space was not taken up with extra avionics. (The compartment is about 51 inches long with the avionics bay fully occupied.) The aft cabin area could handle another 340 pounds, with a further 200 in each wing locker for a total capacity of 1340 pounds. The wing lockers serve as bays for optional fuel tanks, so they may or may not be usable for baggage. This new plane was designated the Cessna 421B.

The B model gained a few extra refinements over the next four years. The pressurization system was improved, raising the pressure differential first to 4.2, then 4.4 inches. The cabin and windows were made larger and in 1975, a known-icing package was offered.

In 1976, Cessna brought out the 421C, incorporating the sweeping design changes that the company was applying to most of its twins at the time. The distinctive “Stabila-Tip” tanks (with their bladders) were gone, replaced by a simpler, bonded wet-wing fuel system. This system raised the standard fuel system capacity to 213 gallons, or 270 with all optional tanks installed.

Removing all that weight from the wing tips increased the airplane’s stability, as did an increase in the size of the fin and rudder. The end result was better handling in both normal and single-engine operations. The new wing also improved single-engine performance, with increased single-engine service ceiling and rate of climb.

The electromechanical landing gear was changed from straight-leg to a hydraulic trailing-link design from the 1981 model year onwards. This featured trailing-link mains and a high-pressure nitrogen blow-down bottle for emergencies. The new system increased reliability slightly.

The engines were replaced with the Continental GTSIO-520-L engine and maximum gross weight of the C model was increased to 7450 pounds—the same as the B—but the standard empty weight was higher.

The C model was produced, relatively unchanged, for nine years. In 1985 it, like all the other piston Cessnas, was discontinued for lack of sales. Overall, the 421C represents about half of the production run of 1920 aircraft.

Some 421s have been modified to accept turboprop engines, making them very similar to the Cessna 425, which itself is a turboprop development of the 421.

The 421 is an all-metal low-wing cabin monoplane with a retractable tricycle landing gear, and powered by two geared[a] Continental GTSIO-520-D engines, wing-mounted in tractor configuration. The cabin is accessed from a door, on the left hand side behind the wing, and has seating for six on the basic 421, or up to ten on later variants.

Re-engined 421C with Pratt & Whitney Canada PT6A-135A or PT6A-112 turboprops, supplemental type certificate held by Excalibur 421 LLC of Paso Robles, California. In 2013 it was announced that Aviation Alliance is acting as program managers for the Excalibur 421 upgrade program.