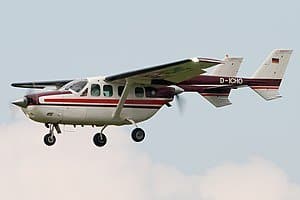 View All Cessna 337 Aircraft For Sale

The Cessna 337 is a six seat, high-wing, twin piston engine aircraft built in a push-pull configuration with twin boom tail structure produced by Cessna from 1965 until 1980. Distinguishing features are: fixed landing gear and constant-speed propellers. Model 336 seats up to 5 passengers and 1 pilot.

The Cessna Skymaster is an American twin-engine civil utility aircraft built in a push-pull configuration. Its engines are mounted in the nose and rear of its pod-style fuselage. Twin booms extend aft of the wings to the vertical stabilizers, with the rear engine between them. The horizontal stabilizer is aft of the pusher propeller, mounted between and connecting the two booms. The combined tractor and pusher engines produce centerline thrust and a unique sound.

The first Skymasters, the model designation 336, were a novel concept in that one engine was in front and other in the rear. This was an effort by Cessna to eliminate the asymmetric thrust problems that more conventional twins suffered in the event of an engine loss. These new airplanes were so unique that the FAA eventually created a new multi-engine rating for “centerline” thrust aircraft, a concept that the Cessna Skymaster originated.

In February 1965, Cessna introduced the Model 337 Super Skymaster. The model was larger, and had more powerful engines, retractable landing gear, and a dorsal air scoop for the rear engine. (The “Super” prefix was subsequently dropped from the name.) In 1966, the turbocharged T337 was introduced, and in 1973, the pressurized P337G entered production.

Cessna built 2993 Skymasters of all variants, including 513 military O-2 versions. Production in America ended in 1982, but was continued by Reims in France, with the FTB337 STOL and the military FTMA Milirole.

The Skymaster handles differently from a conventional twin-engine aircraft, primarily in that if an engine fails, the plane will not yaw toward that engine. Without the issue of differential thrust inherent to conventional (engine-on-wing) twins, engine failure on takeoff will not produce yaw from the runway heading. With no one-engine-out minimum controllable speed (Vmc), in-flight control at any flying speed with an engine inoperative is not as critical as it is with engines on the wing with the associated leverage; however, performance in speed and, particularly, rate of climb are affected. Flying a Skymaster requires a pilot to hold a multiengine rating, although many countries issue a special “centerline thrust rating” for the Skymaster and other similarly configured aircraft.

Ground handling requires certain attention and procedures. The rear engine tends to overheat and can quit while taxiing on very hot days. Accidents have occurred when the runway is shorter than the single-engine take-off roll and pilots, unaware of a rear engine shutdown, have attempted take-off on the nose engine alone. Federal Aviation Administration Airworthiness Directive 77-08-05 prohibits single-engine take-offs and requires the installation of a placard marked “DO NOT INITIATE SINGLE ENGINE TAKEOFF”.

The Skymaster's unique sound is made by its rear pusher propeller slicing through turbulent air from the front propeller and over the airframe while its front tractor propeller addresses undisturbed air.

327 Baby Skymaster – reduced scale four-seat version of the 337, with cantilever wings replacing the 336/337 strut-braced configuration. It first flew in December 1967. One prototype was built before the project was cancelled in 1968 due to lack of commercial interest in the design. The prototype was delivered to NASA to serve as a full-scale model for wind tunnel testing. It was used in a joint Langley Research Center and Cessna project on noise reduction and the use of ducted versus free propellers.

O-2A – US military designation of the 337M Forward air control, observation aircraft for the US Air Force. 501 delivered to the USAF and 12 to the Imperial Iranian Air Force

O-2TT: Improved twin turboprop forward air control aircraft, with same wing (43 ft 0 in) wing and engines of O-2T but with new forward fuselage with tandem seating for pilot and observer to give improved view.