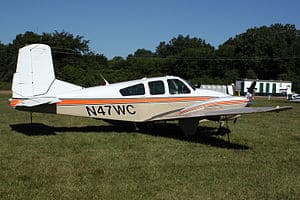 The Beech Travel Air is a twin-engine, piston aircraft with a retractable gear. The Travel Air BE95A is a low-wing airplane produced by Beechcraft between the years 1958 and 1968, Serial Numbers TD2 through TD721. It seats up to 4 passengers and 1 pilot.

The Beechcraft Travel Air was a twin-engine development of the Beechcraft Bonanza. It was designed to fill the gap between the single engine Model 35 Bonanza and the much larger Model 50 Twin Bonanza, and ultimately served as the basis for its replacement, the Baron.

Designed as a competitor to the Cessna 310 and the Piper Apache, the Travel Air (developed as the Badger) took many design features from previous Beechcraft airplanes. It took its basic design from the Model 35 Bonanza, fitted with the vertical stabilizer from the T-34 Mentor, and two four-cylinder engines. Its wing spar was borrowed from the large Model 50 Twin Bonanza, along with thicker gauge aluminum on the leading edge; landing gear systems had been taken from the United States Navy Mentor, which was a stronger structure built for training pilots for later aircraft carrier landings. Power came from, in the 1958 model year, two Lycoming O-360-A1A at 180 horsepower at 2700rpm each. With 75% power, the Travel Air was capable of 200mph at 7,500ft.

Although developed and initially marketed as the Badger, a 1956 letter from the United States Air Force notified Beechcraft that the name had been previously chosen as a reporting name for the Soviet Tupolev Tu-16 bomber; therefore, Beechcraft elected to reuse the Travel Air name, which came from the predecessor company to Beechcraft, the Travel Air Manufacturing Company. Beechcraft set in initial pricing of the Travel Air at $49,500; $10,450 below Cessna's 310 price, yet still $13,510 higher than Piper's Apache pricing.

During its ten-year model run, between 1958 and 1968, the Travel Air saw four distinct variants emerge. All use the ICAO aircraft type designator BE95.

In 1963 the Travel Air featured a larger rear window that is common with the Model A55/B55 Barons. The nose cone was lengthened for improved baggage space. Interior features such as the instrument panel, and heaters were redesigned. A total of 174 D95's between 1963 and 1967.

The E95 featured a one piece, ‘speed-slope' windshield and a more pointed spinner design. The interior design was fully re-done. A total of 14 Model E95's were built in 1968; with pricing of $53,500.[13] The production drop off was due to the more costly but faster and powerful Model 55 Baron (developed from the Model 95, and initially designated Model 95-55).