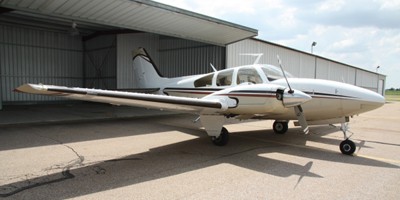 It is a twin-engine, piston aircraft configured as a cantilever low-wing aircraft with a conventional tail. Distinguishing features are: retractable landing gear, variable pitch propellers. Model E55 Baron seats up to 5 passengers and 1 pilot.

The Model 55 was Beech’s first Baron. It came out in 1961 as a replacement for the Model 95 Travel Air, which was a bit long in the tooth to meet competition from Cessna’s 310 and Piper’s Aztec.

Like the Travel Air, the 55 comprised a Bonanza fuselage fitted with a conventional tail, not the V-tail. In place of the Travel Air’s somewhat anemic 180-HP Lycomings, the original Baron had 260-HP Continental IO-470L engines.

After building 190 Barons that first year, Beech came out with the A55, which has a 10-inch longer fuselage and could be ordered with a second fold-down rear seat, bringing potential seating capacity to six (more on that later). A total of 309 A55s were built in 1962 and 1963. The airplane’s nose was then extended seven inches for more baggage and avionics equipment, and gross weight was bumped from 4880 to 5000 pounds. The airplane was redesignated B55.

This version remained in production the longest, until 1983, when all 55s were dropped from the line, along with the 58TC and V-tail Bonanza. Browsing the for-sale ads, expect to see more B55s than any other model because there are simply more of them. Beech built 1954 of the “long nose” B55s from 1964 through 1982, not including about 70 T-42A versions for the U.S. Army. Among a number of minor refinements during this time was an increase in gross weight to 5100 pounds, starting with S/N TC-955 in mid-1965. Earlier B55s were eligible for the higher gross through a Beech STC kit.

The big-engine version arrived two years after the B55. The C55 Baron appeared in 1966 with a 12-inch longer fuselage and 285-HP Continental IO-520C engines. The “little Baron with the big engines” also was certified with a gross weight of 5300 pounds.

The C55, D55 and E55 models had an increased cruise speed of 200 knots (370 km/h) due to the 285 hp (213 kW) Continental IO520s. The ‘big engine' 55 Barons are easy to identify with their big air scoops on the engine cowls. The difference in length is less obvious, but it shows up when it comes time to load the airplane: The nose baggage compartment is larger, as is the cabin. Other differences included the level of standard equipment, and the availability of a 142-gallon and 166-gallon fuel system on the later model big-engine versions.

The Beech Baron E55 was introduced in 1970 and production ran through 1982. They came with four to six seats, a new paint scheme and interior design. An improved avionics and panel, wing-tip lights and rotating beacon made flush, and a new entrance step. Also added were 172 US gallon (166 usable) interconnected tanks with one fill cap per wing became an option in 1976.

The fuel system was simplified in 1974 with interconnected tanks and three-position (on, off, crossfeed) selectors. Also that year, extra aux tanks became available for the E55 model, boosting max fuel capacity to 166 gallons. The electric cowl flaps were changed to manual levers midway through the E55’s production, to eliminate maintenance.