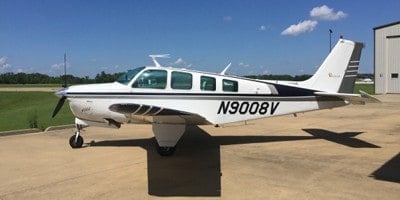 Find All Beech A36 Bonanza Aircraft For Sale

The Beech A36 Bonanza was produced from 1970 through 2005. Model A36 is a single-engine, piston aircraft and is configured as a cantilever low-wing aircraft with a conventional tail. It features retractable landing gear and a constant-speed propeller. The A36 seats four to five passengers in a club seating arrangement and 1 pilot.

The single-engine Beech Bonanza 36 was introduced in 1968 to compete with Piper’s Cherokee Six and the 200-series from Cessna. The Beech Bonanza A36 was developed by lengthening (0.25m) the fuselage of the Model 33, and using the same wing, landing gear and Continental engine of the Baron family, and the tail unit of the Model 33. Six seats were available, and with club-seating arrangements and a foldout table, it became a flying office.

In 1975, the A36 outsold all other Bonanza models for the first time. With a longer cabin and wide double doors, the Bonanza A36 offers greater utility and convenience without sacrificing performance and economy. In 1977 the A36 was offered with factory-installed electric trim, formerly available only on aircraft equipped with an autopilot. The A36 accounted for 50% of the total Bonanza production in 1977, and that percentage increased in 1978.

Standard features on late models are an extended rear compartment for up to 70 pounds of baggage, bringing the baggage total to 470 pounds with four seats occupied; 15-degree approach flap setting; and optional propeller anti-icing.

Brief mention must be made of two military versions of the A36 Bonanza. Designated QU-22B, a number were provided with special avionics equipment under the USAF's ‘Pave Eagle' program. They were deployed in Vietnam to pick up and relay to a ground station the data transmitted from acoustic sensors. Intended to keep track of enemy movements in the dense jungle, the sensors were air-dropped along known or suspected transport routes.

To meet the requirements of the USAF's ‘Pave Coin' competition, Beech developed a close-support two-seat armed version of the A36. Designated Model PD 249, this prototype was evaluated with a wide variety of weapons, carried on underwing racks that could accommodate loads of up to 535kg, but no production examples were built. (courtesy All-Aero)

Find all Beech A36 Bonanza for sale now!