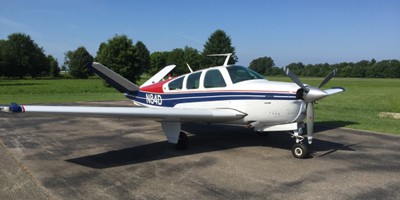 The Beech 35 Bonanza was manufactured between 1947 and 1948, serial number D1 through D1500. It is a single-engine, piston aircraft configured as a cantilever low-wing aircraft with a V-tail. Distinguishing features are: retractable landing gear, wood propeller with controllable pitch propeller. Model 35 Bonanza seats up to 3 passengers and 1 pilot.

A legend in its own right, the Beechcraft 35 Bonanza flew for the first time on December 22, 1945 with veteran Beech test pilot Vern L. Carstens at the wheel. The Model 35 Bonanza met Walter H. Beech´s demand for an airplane that would carry four people and their baggage in car-like comfort. Five engineers were assigned by Ted Wells to design the Model 35. Ralph Harmon led the team composed of Noel Naidenoff, Alex Odevseff, Jerry Gordon and Wilson Erhart (all but Erhart are known to have worked on the challenging XA-38 “Grizzly” project in 1944-1945). Certification was granted on March 25, 1947 and production of the first version, the Model 35, occurred in 1947-1948.

1,500 were built, more than any other Bonanza model. Powered by a 165 hp Continental E-165 opposed engine, the “straight had a range of 750 statute miles on of fuel. Famous V-tail was mounted at 30 degrees from horizontal. Tricycle gear was electrically operated and rugged enough for unimproved landing fields. The nose gear was not steerable on original Model 35 Bonanzas. Wood propeller featured controllable pitch but no governor device.